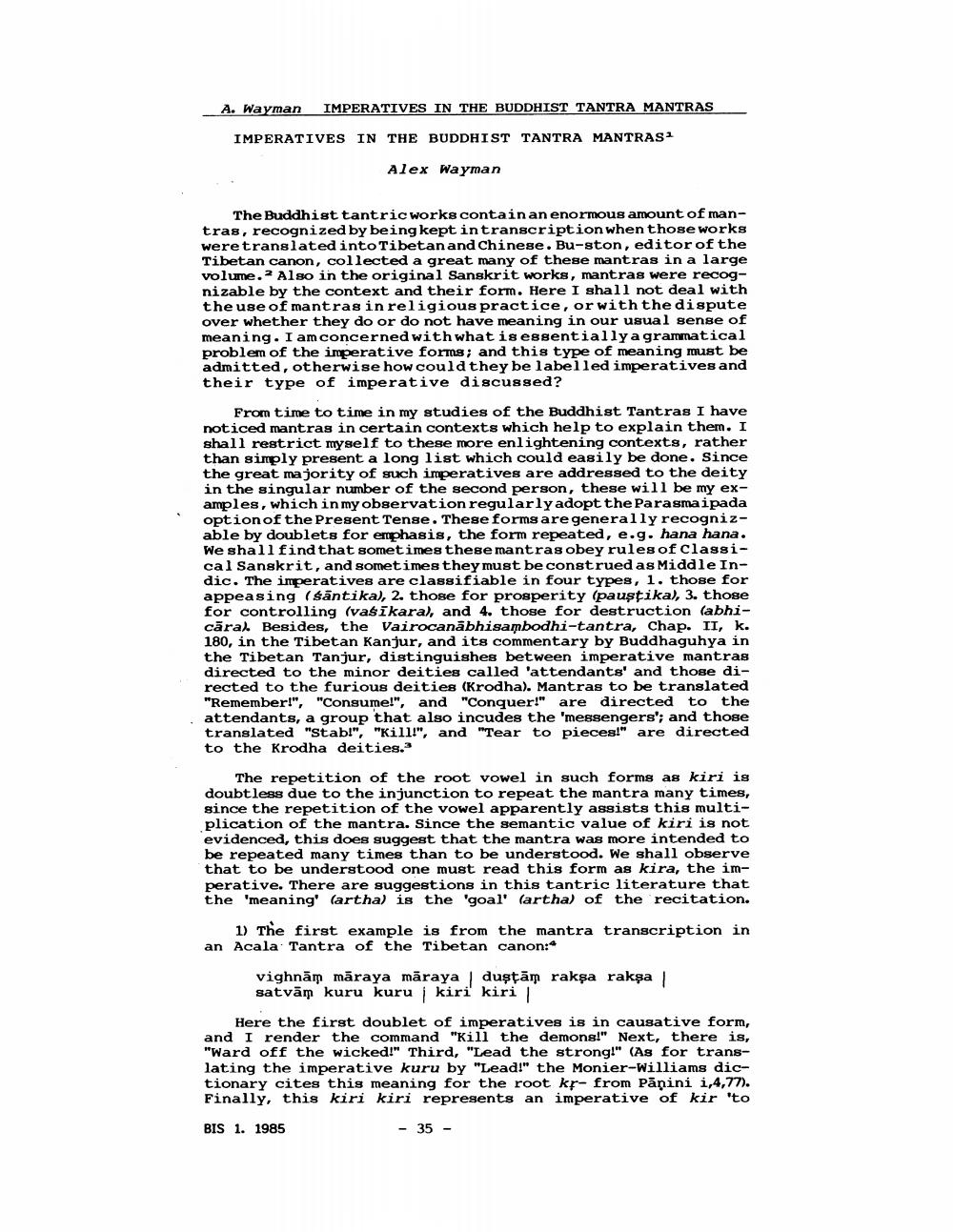 ________________ A. Wayman IMPERATIVES IN THE BUDDHIST TANTRA MANTRAS IMPERATIVES IN THE BUDDHIST TANTRA MANTRASI Alex Wayman The Buddhist tantricworks contain an enormous amount of mantras, recognized by being kept intranscription when those works were translated into Tibetan and Chinese. Bu-ston, editor of the Tibetan canon, collected a great many of these mantras in a large volume.2 Also in the original Sanskrit works, mantras were recognizable by the context and their form. Here I shall not deal with the use of mantras in religious practice, or with the dispute over whether they do or do not have meaning in our usual sense of meaning. I am concerned with what is essentially a grammatical problem of the imperative forms; and this type of meaning must be admitted, otherwise how could they be labelled imperatives and their type of imperative discussed? From time to time in my studies of the Buddhist Tantras I have noticed mantras in certain contexts which help to explain them. I shall restrict myself to these more enlightening contexts, rather than simply present a long list which could easily be done. Since the great majority of such imperatives are addressed to the deity in the singular number of the second person, these will be my examples, which in my observation regularly adopt the Parasmaipada option of the Present Tense. These forms are generally recognizable by doublets for emphasis, the form repeated, e.g. hana hana. We shall find that sometimes these mantras obey rules of classical Sanskrit, and sometimes they must be construed as Middle Indic. The imperatives are classifiable in four types, 1. those for appeasing (santika), 2. those for prosperity (paustika), 3. those for controlling (vasikara), and 4. those for destruction (abhicara). Besides, the Vairocanabhisambodhi-tantra, Chap. II, k. 180, in the Tibetan Kanjur, and its commentary by Buddhaguhya in the Tibetan Tanjur, distinguishes between imperative mantras directed to the minor deities called 'attendants' and those directed to the furious deities (Krodha). Mantras to be translated "Remember!", "Consume!", and "Conquer!" are directed to the attendants, a group that also incudes the 'messengers'; and those translated "Stab!", "Kill!", and "Tear to pieces!" are directed to the Krodha deities. 3 The repetition of the root vowel in such forms as kiri is doubtless due to the injunction to repeat the mantra many times, since the repetition of the vowel apparently assists this multiplication of the mantra. Since the semantic value of kiri is not evidenced, this does suggest that the mantra was more intended to d many times than to be understood. We shall observe that to be understood one must read this form as kira, the imperative. There are suggestions in this tantric literature that the 'meaning' (artha) is the 'goal' (artha) of the recitation. 1) The first example is from the mantra transcription in an Acala Tantra of the Tibetan canon: vighnam maraya maraya , dustam raksa raksa satvan kuru kuru | kiri kiri | Here the first doublet of imperatives is in causative form, and I render the command "Kill the demons!" Next, there is, "Ward off the wicked!" Third, "Lead the strong!" (As for translating the imperative kuru by "Lead!" the Monier-Williams dictionary cites this meaning for the root kr- from Panini 1,4,77). Finally, this kiri kiri represents an imperative of kir 'to BIS 1. 1985 - 35 -