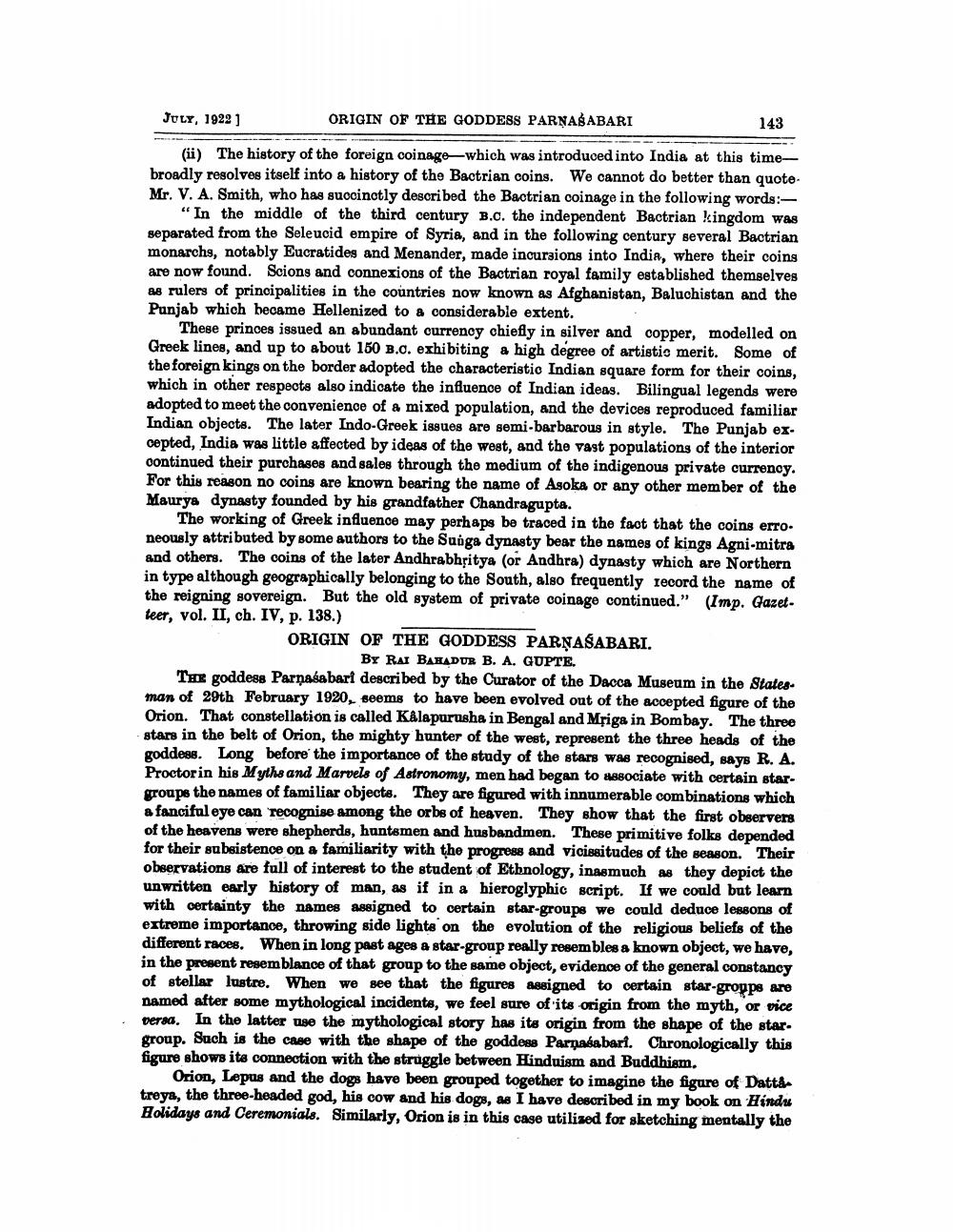 ________________ JULY, 1922) ORIGIN OF THE GODDESS PARNASABARI 143 (ii) The history of the foreign coinage-which was introduced into India at this timebroadly resolves itself into a history of the Bactrian coins. We cannot do better than quote. Mr. V. A. Smith, who has succinctly described the Bactrian coinage in the following words: "In the middle of the third century B.C. the independent Bactrian kingdom was separated from the Seleucid empire of Syria, and in the following century several Bactrian monarchs, notably Eucratides and Menander, made incursions into India, where their coins are now found. Scions and connexions of the Bactrian royal family established themselves as rulers of principalities in the countries now known as Afghanistan, Baluchistan and the Punjab which became Hellenized to a considerable extent. . These princes issued an abundant currency chiefly in silver and copper, modelled on Greek lines, and up to about 150 B.C. exhibiting a high degree of artistic merit. Some of the foreign kings on the border adopted the characteristic Indian square form for their coins, which in other respects also indicate the influence of Indian ideas. Bilingual legends were adopted to meet the convenience of a mixed population, and the devices reproduced familiar Indian objects. The later Indo-Greek issues are semi-barbarous in style. The Punjab excepted, India was little affected by ideas of the west, and the vast populations of the interior continued their purchases and sales through the medium of the indigenous private currency. For this reason no coins are known bearing the name of Asoka or any other member of the Maurya dynasty founded by his grandfather Chandragupta. The working of Greek influence may perhaps be traced in the fact that the coins erro. neously attributed by some authors to the Surga dynasty bear the names of kings Agni-mitra and others. The coins of the later Andhrabhsitya (or Andhra) dynasty which are Northern in type although geographically belonging to the South, also frequently record the name of the reigning sovereign. But the old system of private coinage continued." (Imp. Gazetteer, vol. II, ch. IV, p. 138.) ORIGIN OF THE GODDESS PARNASABARI. By RAI BAHADUR B. A. GUPTE. THE goddess Parnasabari described by the Curator of the Dacca Museum in the States. man of 29th February 1920, seems to have been evolved out of the accepted figure of the Orion. That constellation is called Kalapurusha in Bengal and Mpiga in Bombay. The three stars in the belt of Orion, the mighty hunter of the west, represent the three heads of the goddess. Long before the importance of the study of the stars was recognised, says R. A. Proctorin his Myths and Marvels of Astronomy, men had began to associate with certain stargroups the names of familiar objects. They are figured with innumerable combinations which a fanciful eye can recognise among the orbs of heaven. They show that the first observers of the heavens were shepherds, huntsmen and husbandmen. These primitive folks depended for their subsistence on a familiarity with the progress and vicissitudes of the season. Their observations are full of interest to the student of Ethnology, inasmuch as they depict the unwritten early history of man, as if in a hieroglyphic script. If we could but learn with certainty the names assigned to certain star-groups we could deduce lessons of extreme importance, throwing side lights on the evolution of the religious beliefs of the different races. When in long past ages a star-group really resembles a known object, we have, in the present resemblance of that group to the same object, evidence of the general constancy of stellar lustre. When we see that the figures assigned to certain star-gropps are named after some mythological incidents, we feel sure of 'its origin from the myth, or vice versa. In the latter use the mythological story has its origin from the shape of the star. group. Such is the case with the shape of the goddess Parnasabari. Chronologically this figure shows its connection with the struggle between Hinduism and Buddhism. Orion, Lepus and the dogs have been grouped together to imagine the figure of Datta. treya, the three-headed god, his cow and his dogs, as I have described in my book on Hindu Holidays and Ceremonials. Similarly, Orion is in this case utilized for sketching mentally the