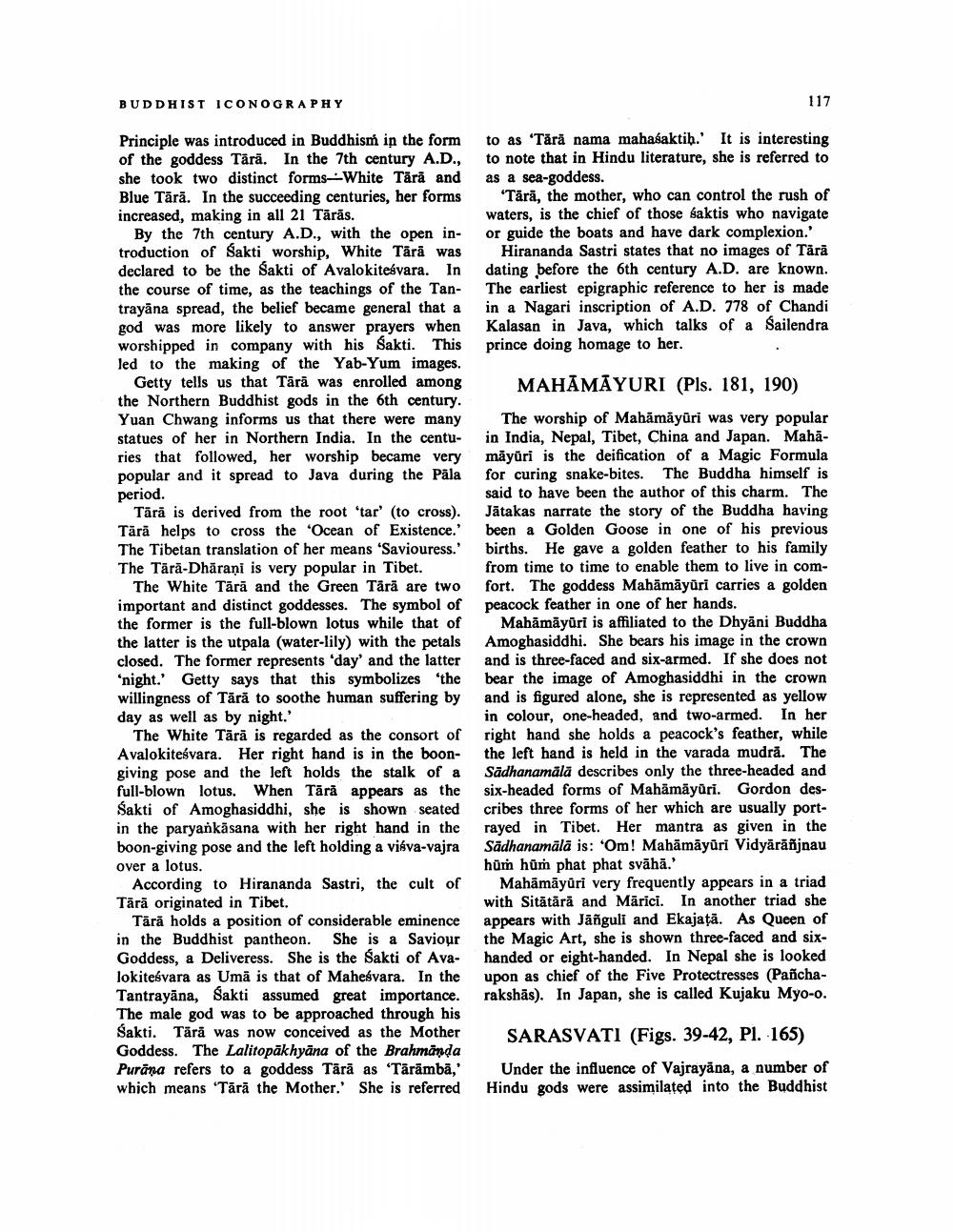 ________________ BUDDHIST ICONOGRAPHY 117 to as "Tara nama mahasaktih.' It is interesting to note that in Hindu literature, she is referred to as a sea-goddess. 'Tara, the mother, who can control the rush of waters, is the chief of those saktis who navigate or guide the boats and have dark complexion.' Hirananda Sastri states that no images of Tara dating before the 6th century A.D. are known. The earliest epigraphic reference to her is made in a Nagari inscription of A.D. 778 of Chandi Kalasan in Java, which talks of a Sailendra prince doing homage to her. Principle was introduced in Buddhism in the form of the goddess Tara. In the 7th century A.D., she took two distinct forms-White Tara and Blue Tara. In the succeeding centuries, her forms increased, making in all 21 Taras. By the 7th century A.D., with the open in- troduction of Sakti worship, White Tara was declared to be the Sakti of Avalokitesvara. In the course of time, as the teachings of the Tan- trayana spread, the belief became general that a god was more likely to answer prayers when worshipped in company with his Sakti. This led to the making of the Yab-Yum images. Getty tells us that Tara was enrolled among the Northern Buddhist gods in the 6th century. Yuan Chwang informs us that there were many statues of her in Northern India. In the centu- ries that followed, her worship became very popular and it spread to Java during the Pala period. Tara is derived from the root 'tar' (to cross). Tara helps to cross the 'Ocean of Existence.' The Tibetan translation of her means 'Saviouress.' The Tara-Dharani is very popular in Tibet. The White Tara and the Green Tara are two important and distinct goddesses. The symbol of the former is the full-blown lotus while that of the latter is the utpala (water-lily) with the petals closed. The former represents day' and the latter 'night. Getty says that this symbolizes 'the willingness of Tara to soothe human suffering by day as well as by night.' The White Tara is regarded as the consort of Avalokitesvara. Her right hand is in the boon- giving pose and the left holds the stalk of a full-blown lotus. When Tara appears as the Sakti of Amoghasiddhi, she is shown seated in the paryankasana with her right hand in the boon-giving pose and the left holding a visva-vajra over a lotus. According to Hirananda Sastri, the cult of Tara originated in Tibet. Tara holds a position of considerable eminence in the Buddhist pantheon. She is a Saviour Goddess, a Deliveress. She is the Sakti of Ava- lokitesvara as Uma is that of Mahesvara. In the Tantrayana, Sakti assumed great importance. The male god was to be approached through his Sakti. Tara was now conceived as the Mother Goddess. The Lalitopakhyana of the Brahmanda Purana refers to a goddess Tara as "Taramba," which means 'Tara the Mother.' She is referred MAHAMAYURI (Pls. 181, 190) The worship of Mabamayuri was very popular in India, Nepal, Tibet, China and Japan. Mahamayuri is the deification of a Magic Formula for curing snake bites. The Buddha himself is said to have been the author of this charm. The Jatakas narrate the story of the Buddha having been a Golden Goose in one of his previous births. He gave a golden feather to his family from time to time to enable them to live in comfort. The goddess Mahamayuri carries a golden peacock feather in one of her hands. Mahamayuri is affiliated to the Dhyani Buddha Amoghasiddhi. She bears his image in the crown and is three-faced and six-armed. If she does not bear the image of Amoghasiddhi in the crown and is figured alone, she is represented as yellow in colour, one-headed, and two-armed. In her right hand she holds a peacock's feather, while the left hand is held in the varada mudra. The Sadhanamala describes only the three-headed and six-headed forms of Mahamayuri. Gordon describes three forms of her which are usually portrayed in Tibet. Her mantra as given in the Sadhanamala is: 'Om! Mahamayuri Vidyaranjnau hum hum phat phat svaha." Mahamayuri very frequently appears in a triad with Sitatara and Marici. In another triad she appears with Janguli and Ekajata. As Queen of the Magic Art, she is shown three-faced and sixhanded or eight-handed. In Nepal she is looked upon as chief of the Five Protectresses (Pancharakshas). In Japan, she is called Kujaku Myo-o. SARASVATI (Figs. 39-42, Pl. 165) Under the influence of Vajrayana, a number of Hindu gods were assimilated into the Buddhist