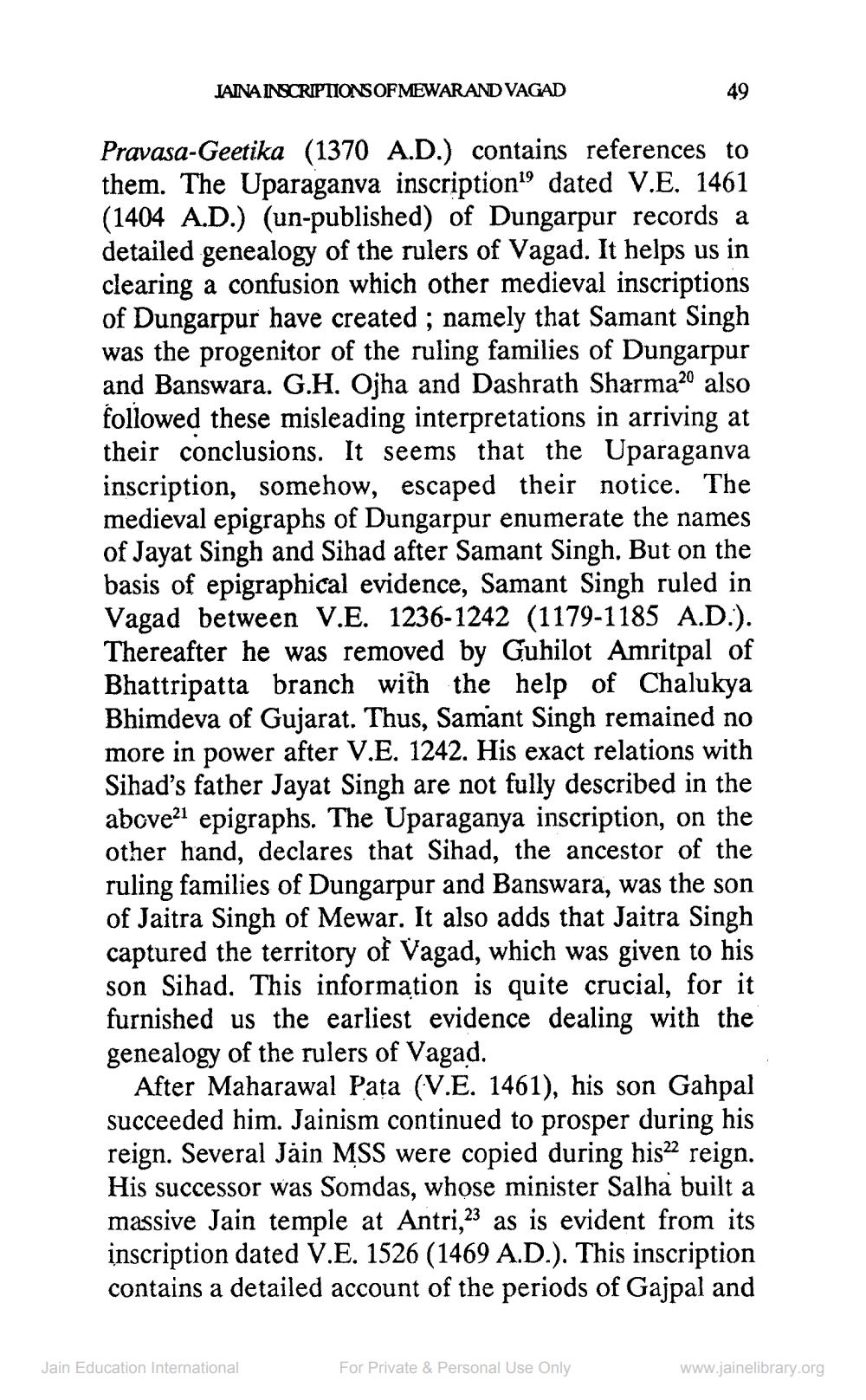 ________________ JAINA INSCRIPTIONS OFMEWARAND VAGAD Pravasa-Geetika (1370 A.D.) contains references to them. The Uparaganva inscription" dated V.E. 1461 (1404 A.D.) (un-published) of Dungarpur records a detailed genealogy of the rulers of Vagad. It helps us in clearing a confusion which other medieval inscriptions of Dungarpur have created ; namely that Samant Singh was the progenitor of the ruling families of Dungarpur and Banswara. G.H, Ojha and Dashrath Sharma20 also followed these misleading interpretations in arriving at their conclusions. It seems that the Uparaganva inscription, somehow, escaped their notice. The medieval epigraphs of Dungarpur enumerate the names of Jayat Singh and Sihad after Samant Singh. But on the basis of epigraphical evidence, Samant Singh ruled in Vagad between V.E. 1236-1242 (1179-1185 A.D.). Thereafter he was removed by Guhilot Amritpal of Bhattripatta branch with the help of Chalukya Bhimdeva of Gujarat. Thus, Samant Singh remained no more in power after V.E. 1242. His exact relations with Sihad's father Jayat Singh are not fully described in the abovezi epigraphs. The Uparaganya inscription, on the other hand, declares that Sihad, the ancestor of the ruling families of Dungarpur and Banswara, was the son of Jaitra Singh of Mewar. It also adds that Jaitra Singh captured the territory of Vagad, which was given to his son Sihad. This information is quite crucial, for it furnished us the earliest evidence dealing with the genealogy of the rulers of Vagad. After Maharawal Pata (V.E. 1461), his son Gahpal succeeded him. Jainism continued to prosper during his reign. Several Jain MSS were copied during his22 reign. His successor was Somdas, whose minister Salha built a massive Jain temple at Antri,23 as is evident from its inscription dated V.E. 1526 (1469 A.D.). This inscription contains a detailed account of the periods of Gajpal and Jain Education International For Private & Personal Use Only www.jainelibrary.org