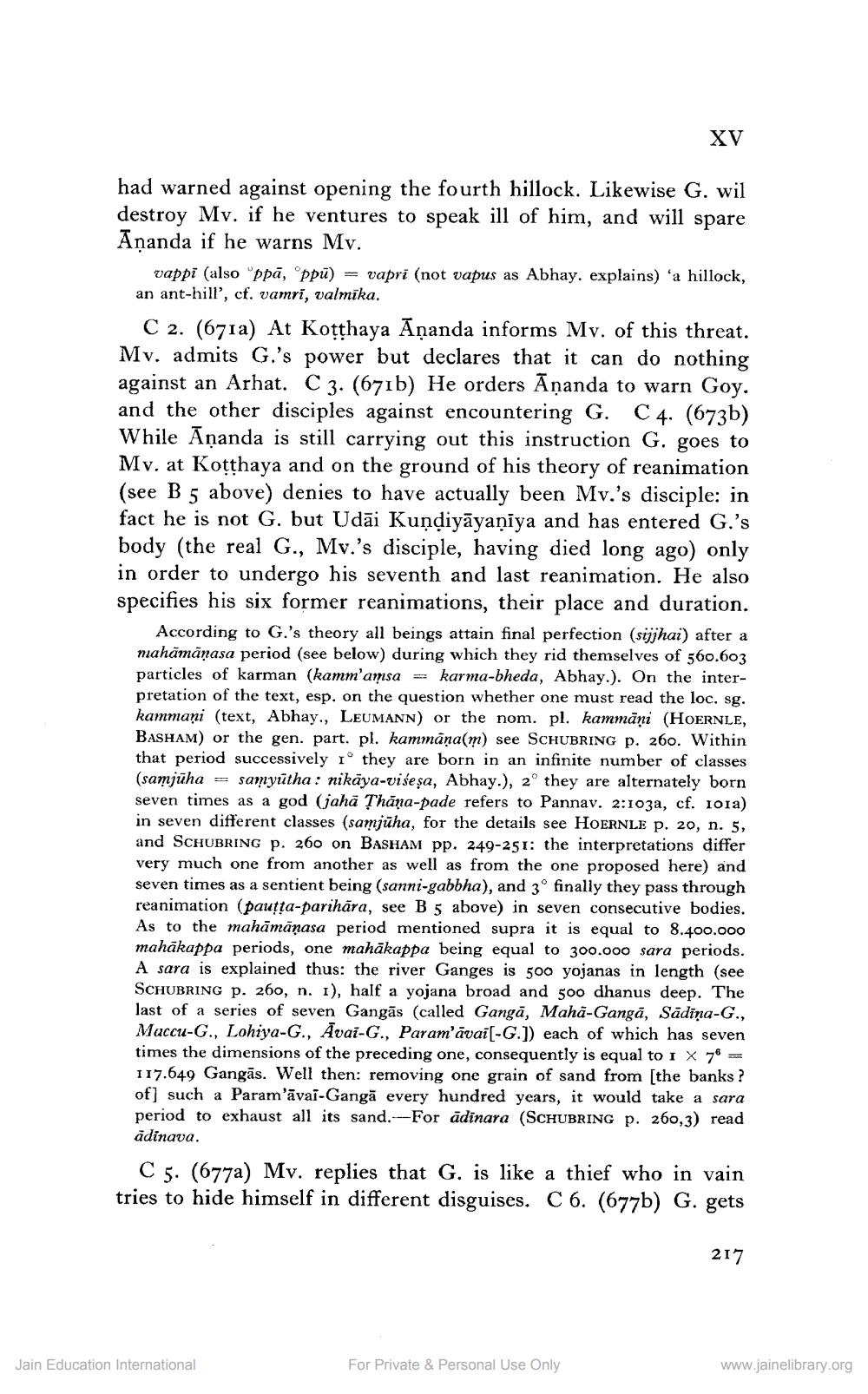 ________________ XV had warned against opening the fourth hillock. Likewise G. wil destroy Mv. if he ventures to speak ill of him, and will spare Ananda if he warns Mv. vappi (also oppa, ppu) = vapri (not vapus as Abhay. explains) 'a hillock, an ant-hill', cf. vamri, valmika. C 2. (671a) At Kotthaya Ananda informs Mv. of this threat. Mv. admits G.'s power but declares that it can do nothing against an Arhat. C 3. (671b) He orders Ananda to warn Goy. and the other disciples against encountering G. C 4. (673b) While Amanda is still carrying out this instruction G. goes to Mv. at Kotthaya and on the ground of his theory of reanimation (see B 5 above) denies to have actually been Mv.'s disciple: in fact he is not G. but Udai Kundiyayaniya and has entered G's body (the real G., Mv.'s disciple, having died long ago) only in order to undergo his seventh and last reanimation. He also specifies his six former reanimations, their place and duration. According to G's theory all beings attain final perfection (sijjhai) after a mahamanasa period (see below) during which they rid themselves of 560.603 particles of karman (kamm'amsa = karma-bheda, Abhay.). On the interpretation of the text, esp. on the question whether one must read the loc, sg. kammani (text, Abhay., LEUMANN) or the nom. pl. kammani (HOERNLE, BASHAM) or the gen. part. pl. kammana(m) see SCHUBRING p. 260. Within that period successively ro they are born in an infinite number of classes (samjuha = samyutha: nikaya-visesa, Abhay.), 2deg they are alternately born seven times as a god (jaha Thana-pade refers to Pannav. 2:103a, cf. 101a) in seven different classes (samjuha, for the details see HOERNLE P. 20, n. 5, and SCHUBRING p. 260 on BASHAM Pp. 249-251: the interpretations differ very much one from another as well as from the one proposed here) and seven times as a sentient being (sanni-gabbha), and 3deg finally they pass through reanimation (pautta-parihara, see B 5 above) in seven consecutive bodies. As to the mahamanasa period mentioned supra it is equal to 8.400.000 mahakappa periods, one mahakappa being equal to 300.000 sara periods. A sara is explained thus: the river Ganges is 500 yojanas in length (see SCHUBRING p. 260, n. 1), half a yojana broad and 500 dhanus deep. The last of a series of seven Gangas (called Ganga, Maha-Ganga, Sadina-G., Muccu-G., Lohiya-G., Avai-G., Param'avais-G.]) each of which has seven times the dimensions of the preceding one, consequently is equal to 1 X 76 = 117.649 Gangas. Well then: removing one grain of sand from (the banks ? of such a Param'avai-Ganga every hundred years, it would take a sara period to exhaust all its sand. -For adinara (SCHUBRING p. 260,3) read adinava, C 5. (677a) Mv. replies that G. is like a thief who in vain tries to hide himself in different disguises. C 6. (677b) G. gets 217 Jain Education International For Private & Personal Use Only www.jainelibrary.org