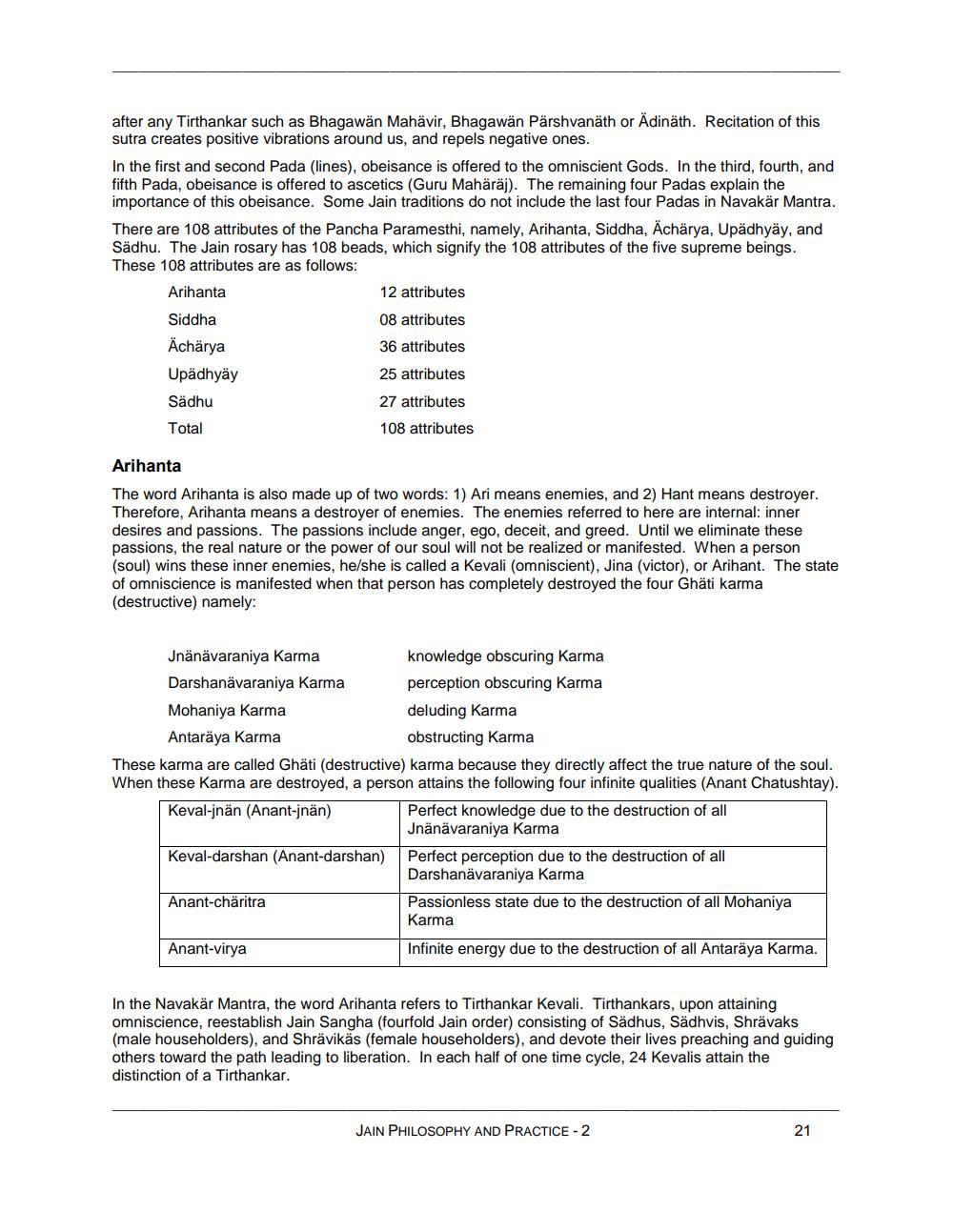 ________________ after any Tirthankar such as Bhagawan Mahavir, Bhagawan Parshvanath or Adinath. Recitation of this sutra creates positive vibrations around us, and repels negative ones. In the first and second Pada (lines), obeisance is offered to the omniscient Gods. In the third, fourth, and fifth Pada, obeisance is offered to ascetics (Guru Maharaj). The remaining four Padas explain the importance of this obeisance. Some Jain traditions do not include the last four Padas in Navakar Mantra. There are 108 attributes of the Pancha Paramesthi, namely, Arihanta, Siddha, Acharya, Upadhyay, and Sadhu. The Jain rosary has 108 beads, which signify the 108 attributes of the five supreme beings. These 108 attributes are as follows: Arihanta Siddha Acharya Upadhyay 12 attributes 08 attributes 36 attributes 25 attributes 27 attributes Sadhu Total 108 attributes Arihanta The word Arihanta is also made up of two words: 1) Ari means enemies, and 2) Hant means destroyer. Therefore, Arihanta means a destroyer of enemies. The enemies referred to here are internal: inner desires and passions. The passions include anger, ego, deceit, and greed. Until we eliminate these passions, the real nature or the power of our soul will not be realized or manifested. When a person (soul) wins these inner enemies, he/she is called a Kevali (omniscient), Jina (victor), or Arihant. The state of omniscience is manifested when that person has completely destroyed the four Ghati karma (destructive) namely: Jnanavaraniya Karma knowledge obscuring Karma Darshanavaraniya Karma perception obscuring Karma Mohaniya Karma deluding Karma Antaraya Karma obstructing Karma These karma are called Ghati (destructive) karma because they directly affect the true nature of the soul. When these Karma are destroyed, a person attains the following four infinite qualities (Anant Chatushtay). Keval-jnan (Anant-jnan) Perfect knowledge due to the destruction of all Jnanavaraniya Karma Keval-darshan (Anant-darshan) Perfect perception due to the destruction of all Darshanavaraniya Karma Anant-charitra Passionless state due to the destruction of all Mohaniya Karma Anant-virya Infinite energy due to the destruction of all Antaraya Karma. In the Navakar Mantra, the word Arihanta refers to Tirthankar Kevali. Tirthankars, upon attaining omniscience, reestablish Jain Sangha (fourfold Jain order) consisting of Sadhus, Sadhvis, Shravaks (male householders), and Shravikas (female householders), and devote their lives preaching and guiding others toward the path leading to liberation. In each half of one time cycle, 24 Kevalis attain the distinction of a Tirthankar. JAIN PHILOSOPHY AND PRACTICE - 2 21