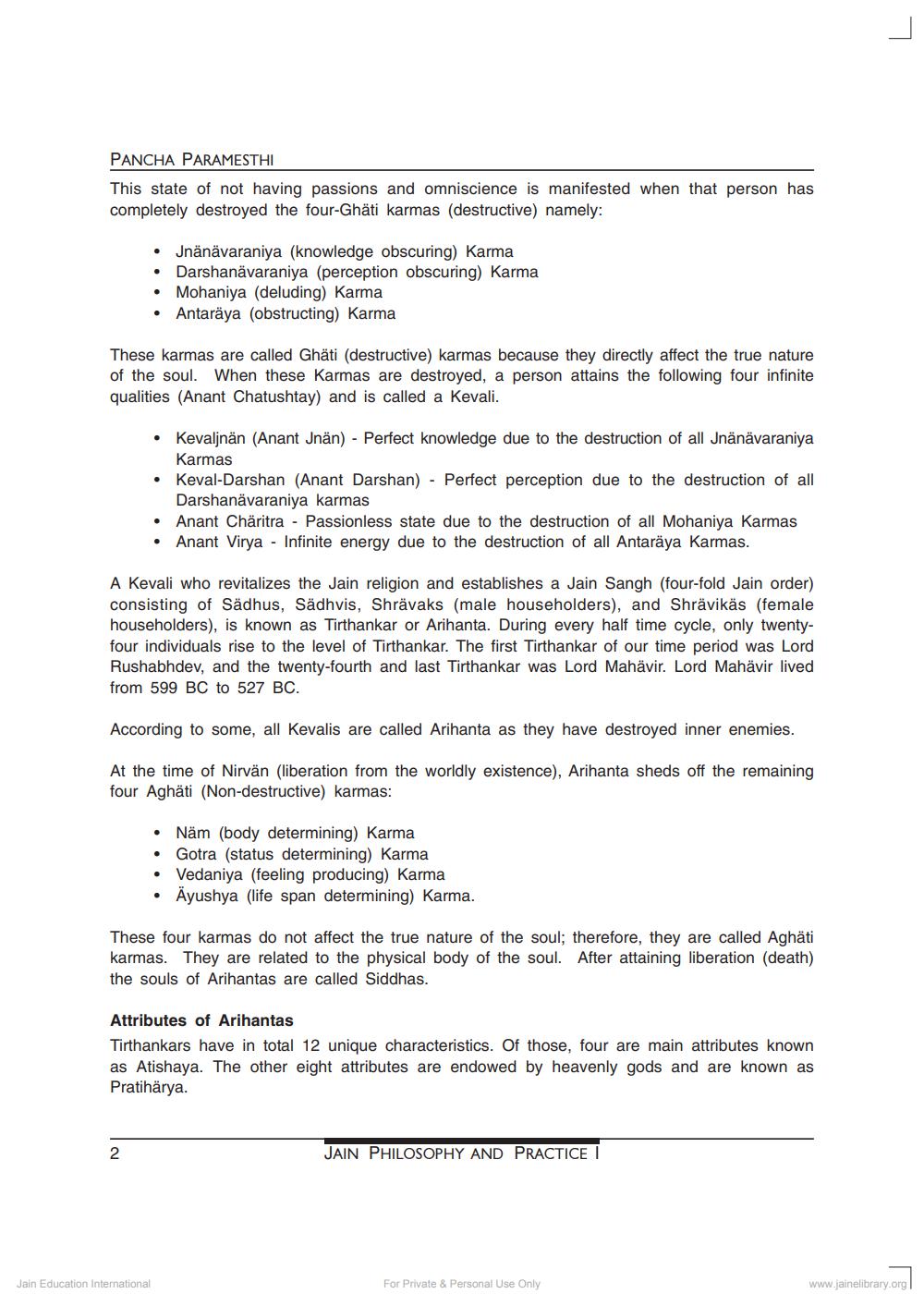 ________________ PANCHA PARAMESTHI This state of not having passions and omniscience is manifested when that person has completely destroyed the four-Ghati karmas (destructive) namely: * Jnanavaraniya (knowledge obscuring) Karma * Darshanavaraniya (perception obscuring) Karma * Mohaniya (deluding) Karma * Antaraya (obstructing) Karma These karmas are called Ghati (destructive) karmas because they directly affect the true nature of the soul. When these Karmas are destroyed, a person attains the following four infinite qualities (Anant Chatushtay) and is called a Kevali. * Kevaljnan (Anant Jnan) - Perfect knowledge due to the destruction of all Jnanavaraniya Karmas Keval-Darshan (Anant Darshan) - Perfect perception due to the destruction of all Darshanavaraniya karmas * Anant Charitra - Passionless state due to the destruction of all Mohaniya Karmas * Anant Virya - Infinite energy due to the destruction of all Antaraya Karmas. A Kevali who revitalizes the Jain religion and establishes a Jain Sangh (four-fold Jain order) consisting of Sadhus, Sadhvis, Shravaks (male householders), and Shravikas (female householders), is known as Tirthankar or Arihanta. During every half time cycle, only twentyfour individuals rise to the level of Tirthankar. The first Tirthankar of our time period was Lord Rushabhdev, and the twenty-fourth and last Tirthankar was Lord Mahavir. Lord Mahavir lived from 599 BC to 527 BC. According to some, all Kevalis are called Arihanta as they have destroyed inner enemies. At the time of Nirvan (liberation from the worldly existence), Arihanta sheds off the remaining four Aghati (Non-destructive) karmas: * Nam (body determining) Karma * Gotra (status determining) Karma * Vedaniya (feeling producing) Karma * Ayushya (life span determining) Karma. These four karmas do not affect the true nature of the soul; therefore, they are called Aghati karmas. They are related to the physical body of the soul. After attaining liberation (death) the souls of Arihantas are called Siddhas. Attributes of Arihantas Tirthankars have in total 12 unique characteristics. Of those, four are main attributes known as Atishaya. The other eight attributes are endowed by heavenly gods and are known as Pratiharya. JAIN PHILOSOPHY AND PRACTICE I Jain Education International For Private & Personal Use Only www.jainelibrary.org