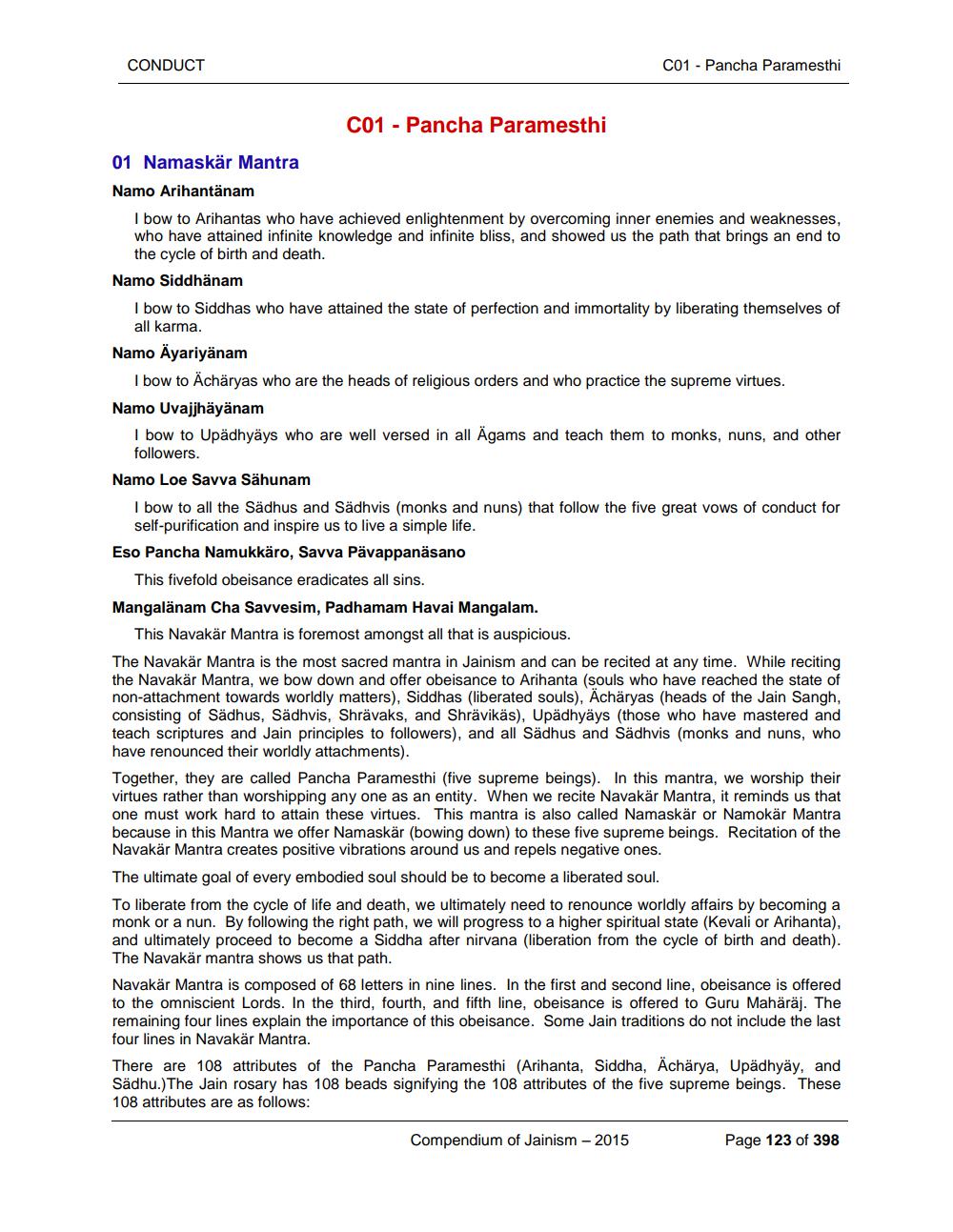 ________________ CONDUCT C01 - Pancha Paramesthi C01 - Pancha Paramesthi 01 Namaskar Mantra Namo Arihantanam I bow to Arihantas who have achieved enlightenment by overcoming inner enemies and weaknesses, who have attained infinite knowledge and infinite bliss, and showed us the path that brings an end to the cycle of birth and death. Namo Siddhanam I bow to Siddhas who have attained the state of perfection and immortality by liberating themselves of all karma. Namo Ayariyanam I bow to Acharyas who are the heads of religious orders and who practice the supreme virtues. Namo Uvajjhayanam I bow to Upadhyays who are well versed in all Agams and teach them to monks, nuns, and other followers. Namo Loe Savva Sahunam I bow to all the Sadhus and Sadhvis (monks and nuns) that follow the five great vows of conduct for self-purification and inspire us to live a simple life. Eso Pancha Namukkaro, Savva Pavappanasano This fivefold obeisance eradicates all sins. Mangalanam Cha Savvesim, Padhamam Havai Mangalam. This Navakar Mantra is foremost amongst all that is auspicious. The Navakar Mantra is the most sacred mantra in Jainism and can be recited at any time. While reciting the Navakar Mantra, we bow down and offer obeisance to Arihanta (souls who have reached the state of non-attachment towards worldly matters), Siddhas (liberated souls), Acharyas (heads of the Jain Sangh, consisting of Sadhus, Sadhvis, Shravaks, and Shravikas), Upadhyays (those who have mastered and teach scriptures and Jain principles to followers), and all Sadhus and Sadhvis (monks and nuns, who have renounced their worldly attachments). Together, they are called Pancha Paramesthi (five supreme beings). In this mantra, we worship their virtues rather than worshipping any one as an entity. When we recite Navakar Mantra, it reminds us that one must work hard to attain these virtues. This mantra is also called Namaskar or Namokar Mantra because in this Mantra we offer Namaskar (bowing down to these five supreme beings. Recitation of the Navakar Mantra creates positive vibrations around us and repels negative ones. The ultimate goal of every embodied soul should be to become a liberated soul. To liberate from the cycle of life and death, we ultimately need to renounce worldly affairs by becoming a monk or a nun. By following the right path, we will progress to a higher spiritual state (Kevali or Arihanta), and ultimately proceed to become a Siddha after nirvana (liberation from the cycle of birth and death). The Navakar mantra shows us that path. Navakar Mantra is composed of 68 letters in nine lines. In the first and second line, obeisance is offered to the omniscient Lords. In the third, fourth, and fifth line, obeisance is offered to Guru Maharaj. The remaining four lines explain the importance of this obeisance. Some Jain traditions do not include the last four lines in Navakar Mantra. There are 108 attributes of the Pancha Paramesthi (Arihanta, Siddha, Acharya, Upadhyay, and Sadhu.)The Jain rosary has 108 beads signifying the 108 attributes of the five supreme beings. These 108 attributes are as follows: Compendium of Jainism - 2015 Page 123 of 398